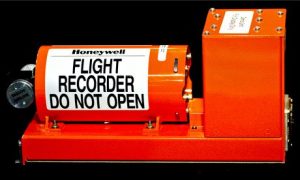 Aerospace Support International has sold several Flight recorders to its customers around the world. The most recent being in April 2014.

A flight recorder is an electronic recording device placed in an aircraft for the purpose of facilitating the investigation of aviation accidents & incidents. Commonly referred to as a Black Box , there are two common types of flight recorders, the flight data recorder commonly known in aviation as (FDR) and the cockpit voice recorder (CVR). In some cases, the two recorders may be combined in a single unit.

Flight recorders are required to be capable of surviving the conditions likely to be encountered in a severe aircraft accident. For this reason, they are typically specified to withstand an impact of 3400 g and temperatures of over 1000 °C.

Please contact us for all your Flight Recorder needs.